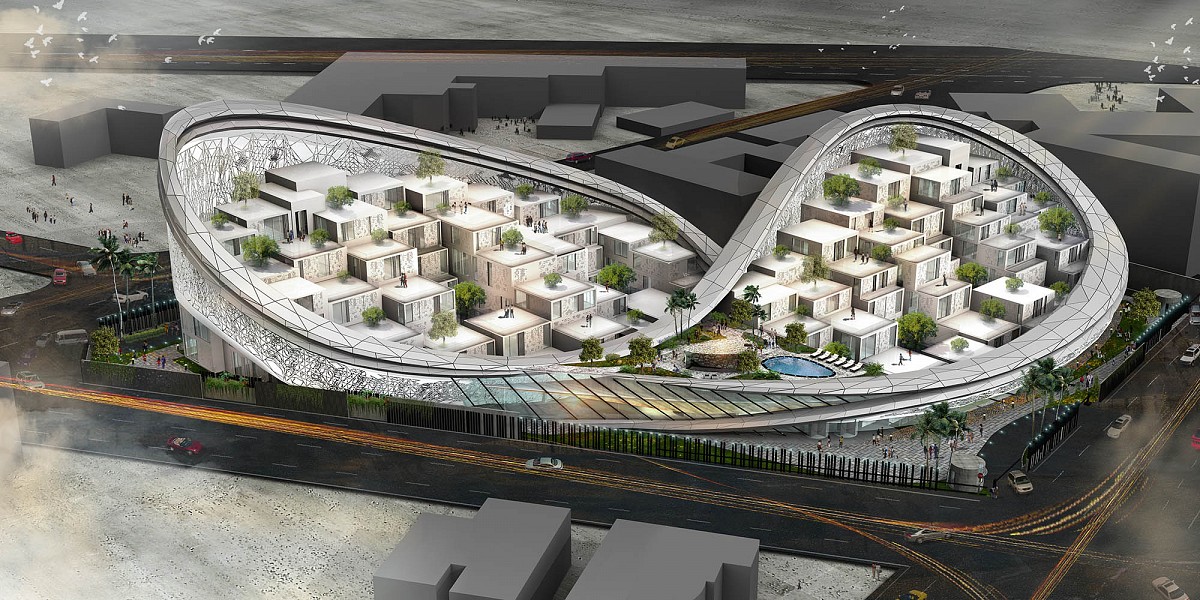 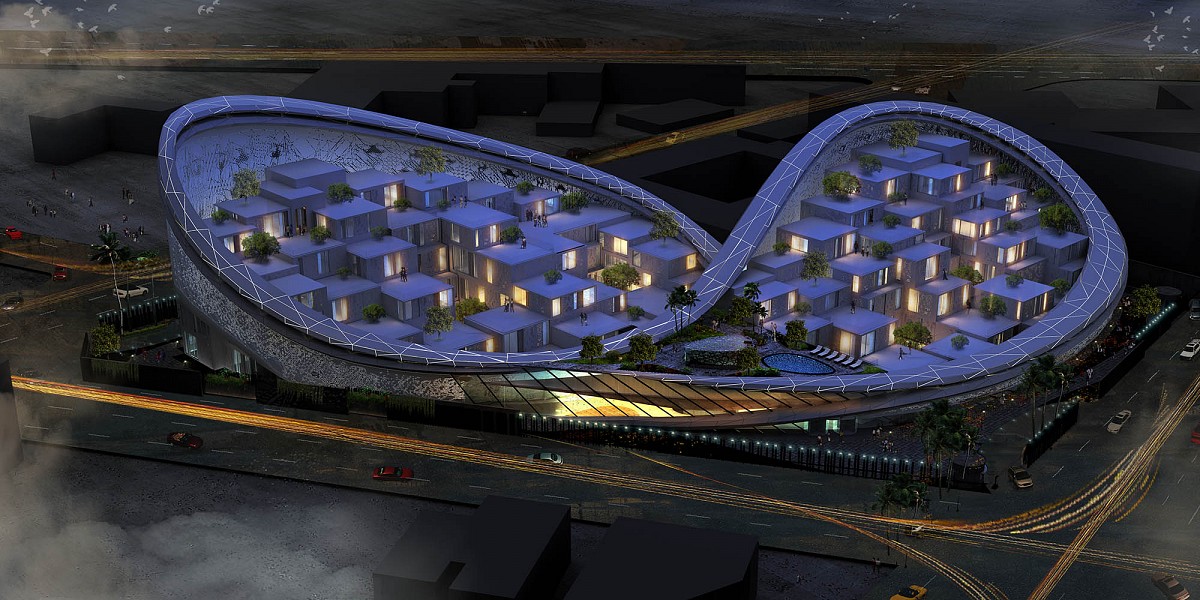 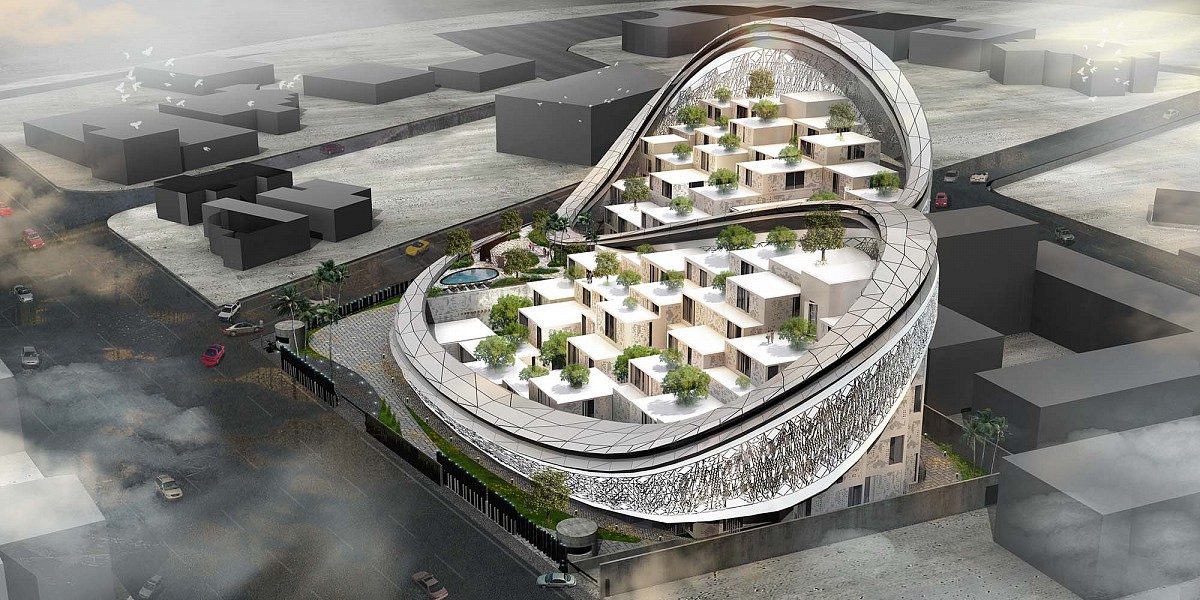 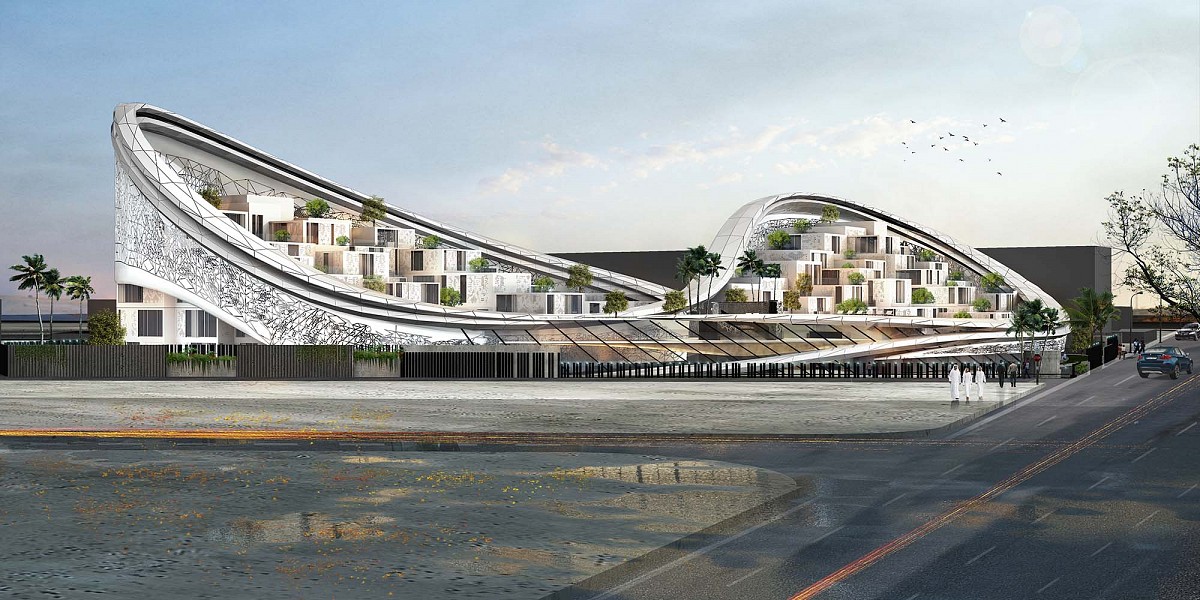 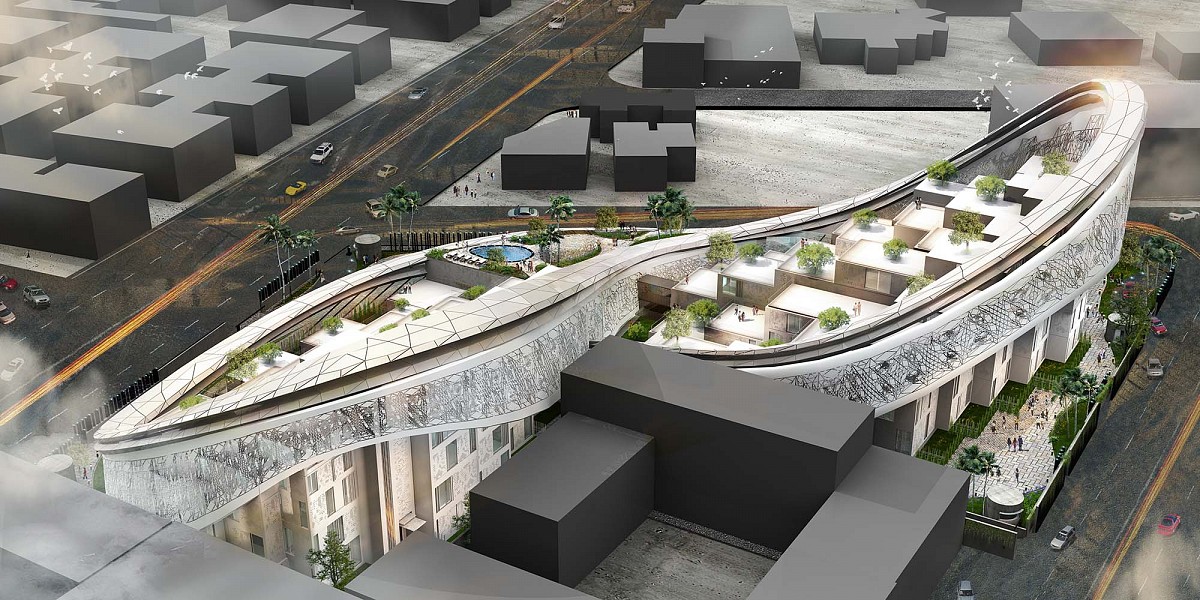 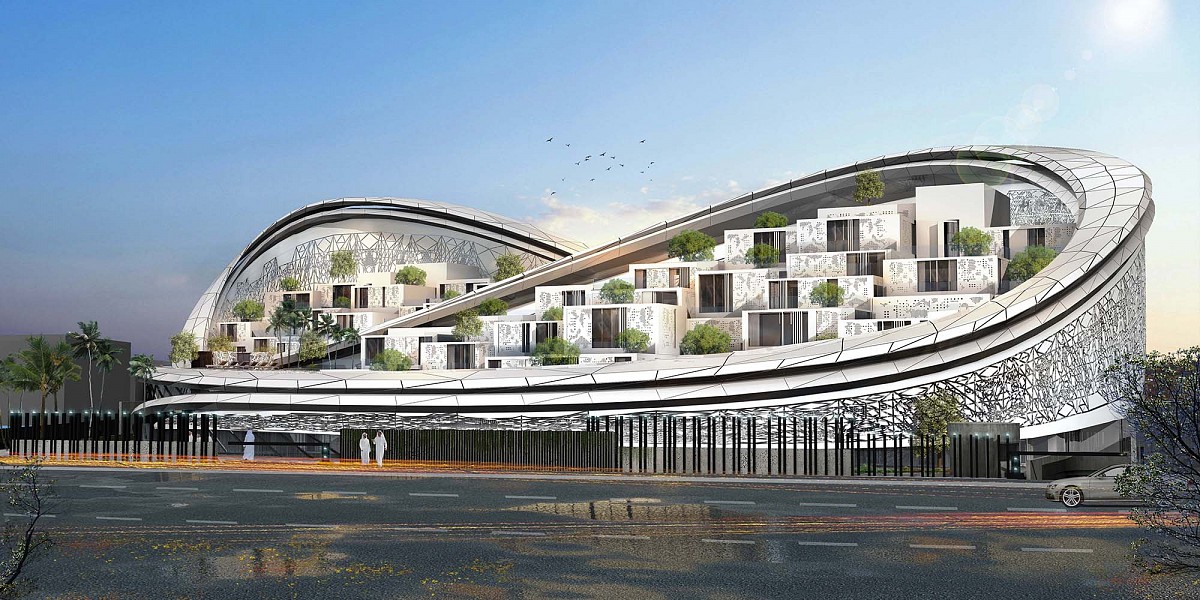 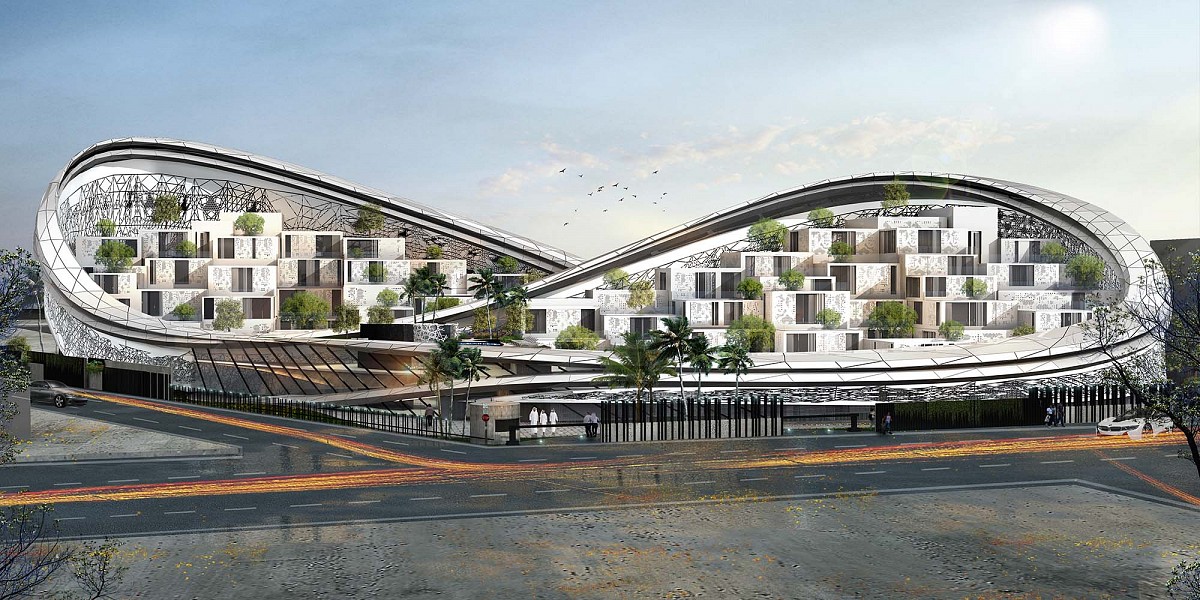 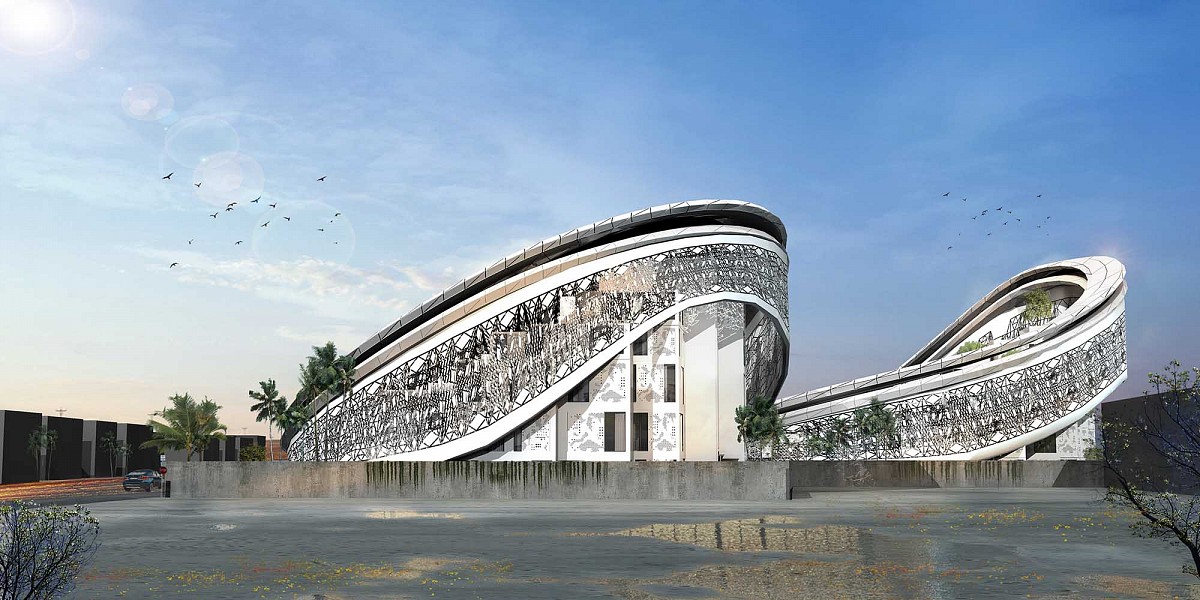 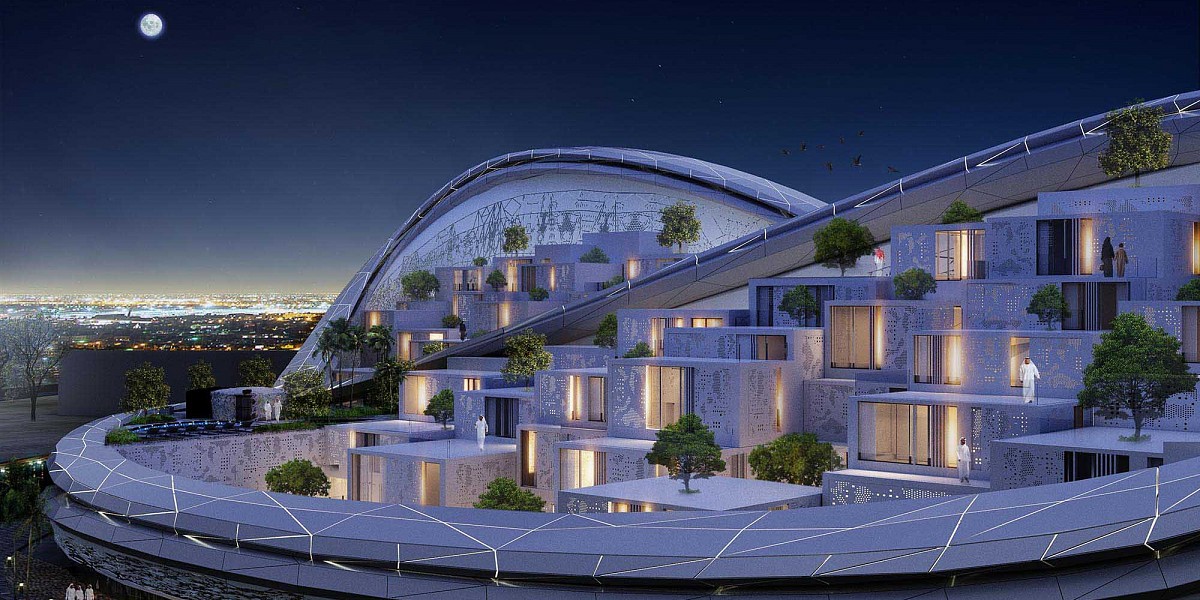 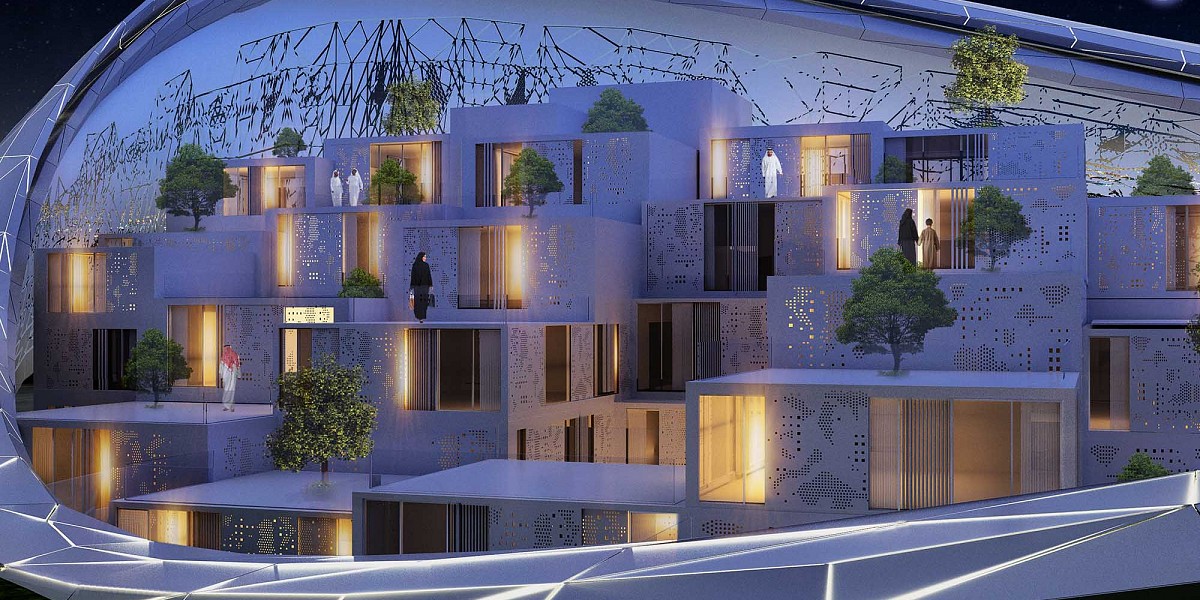 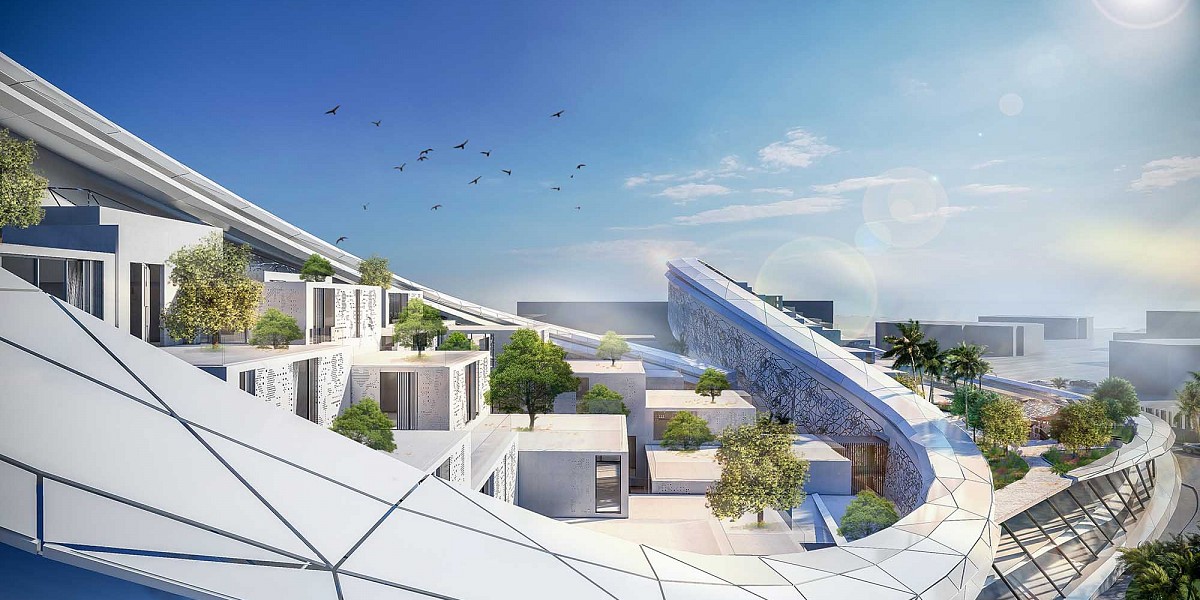 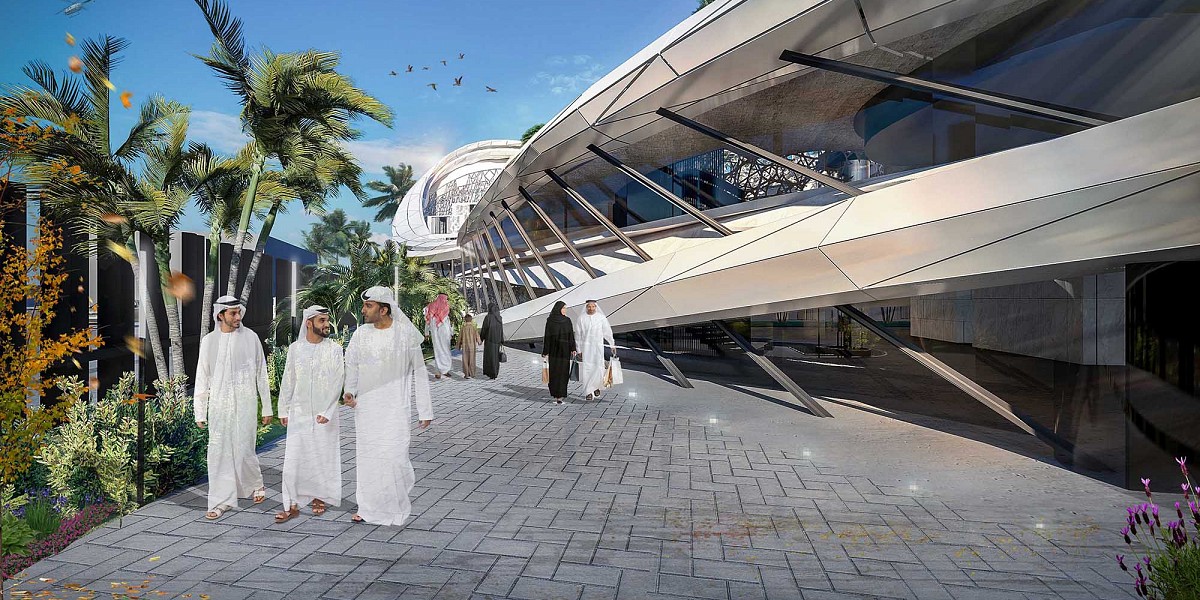 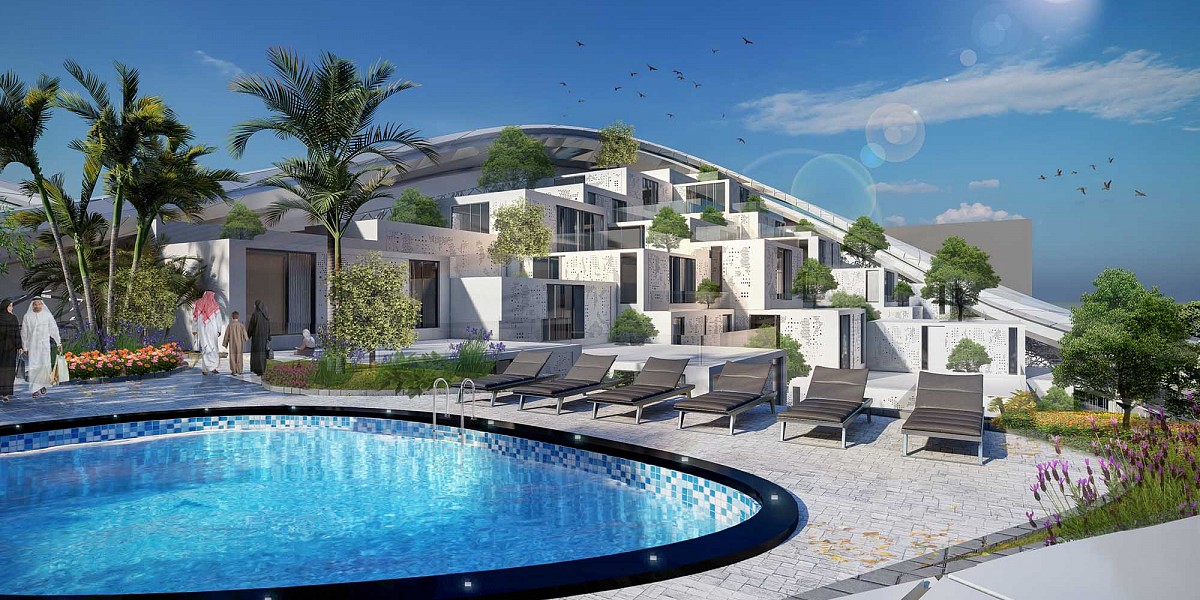 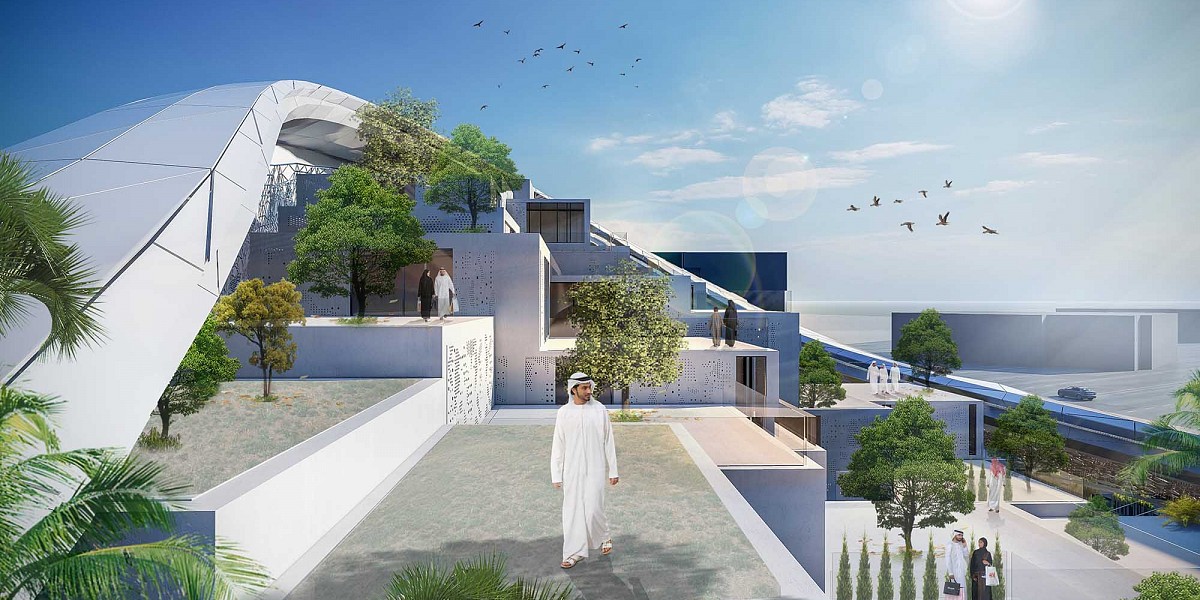 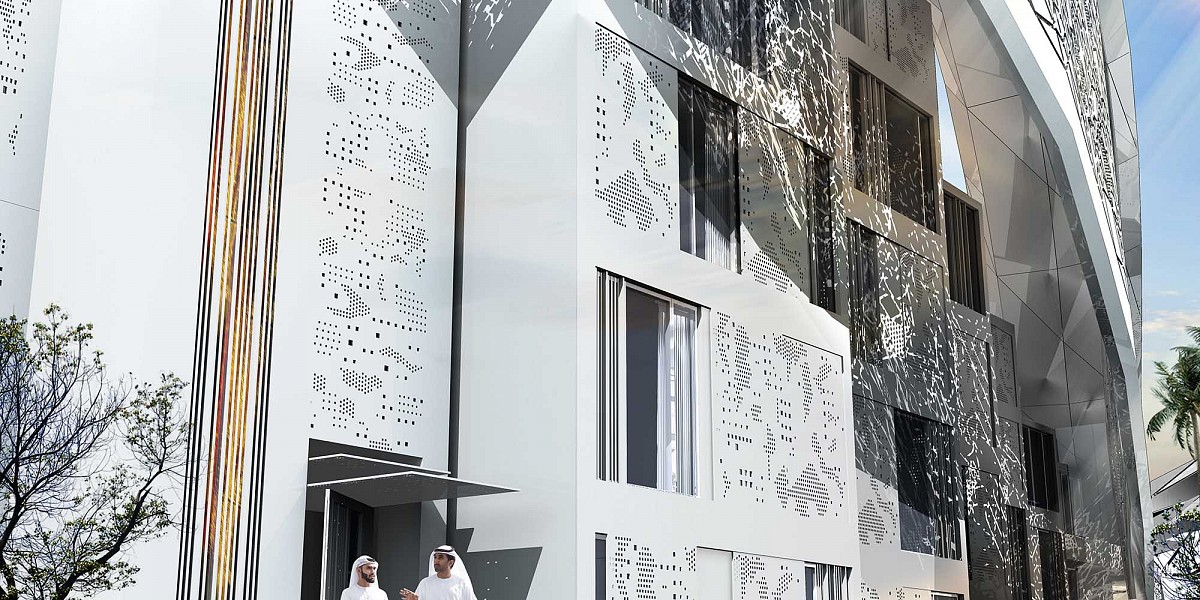 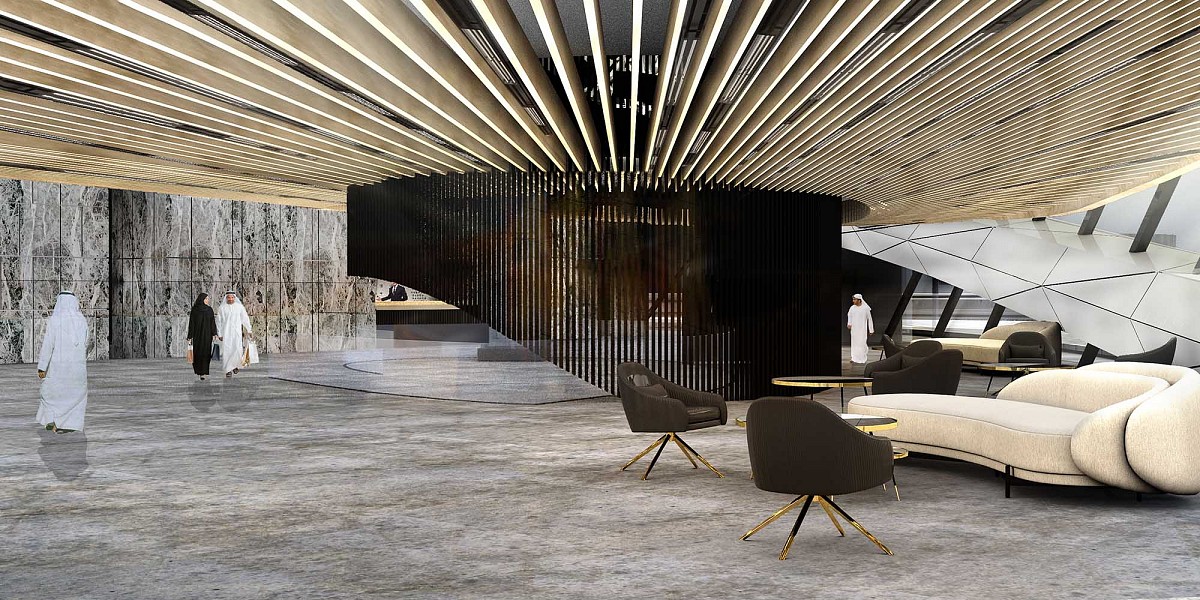 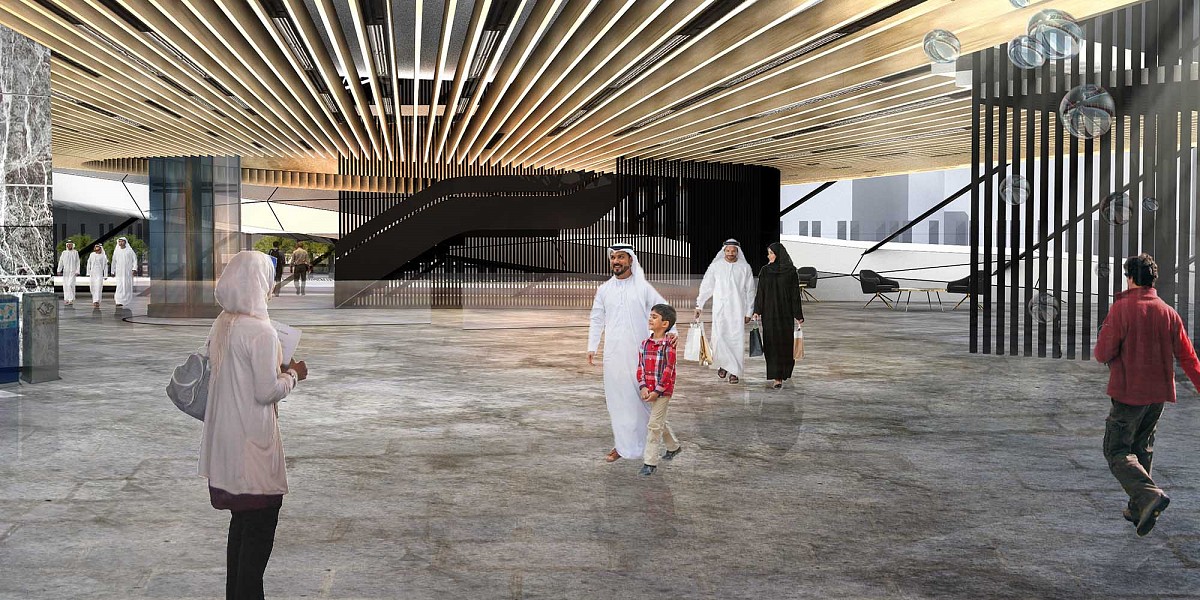 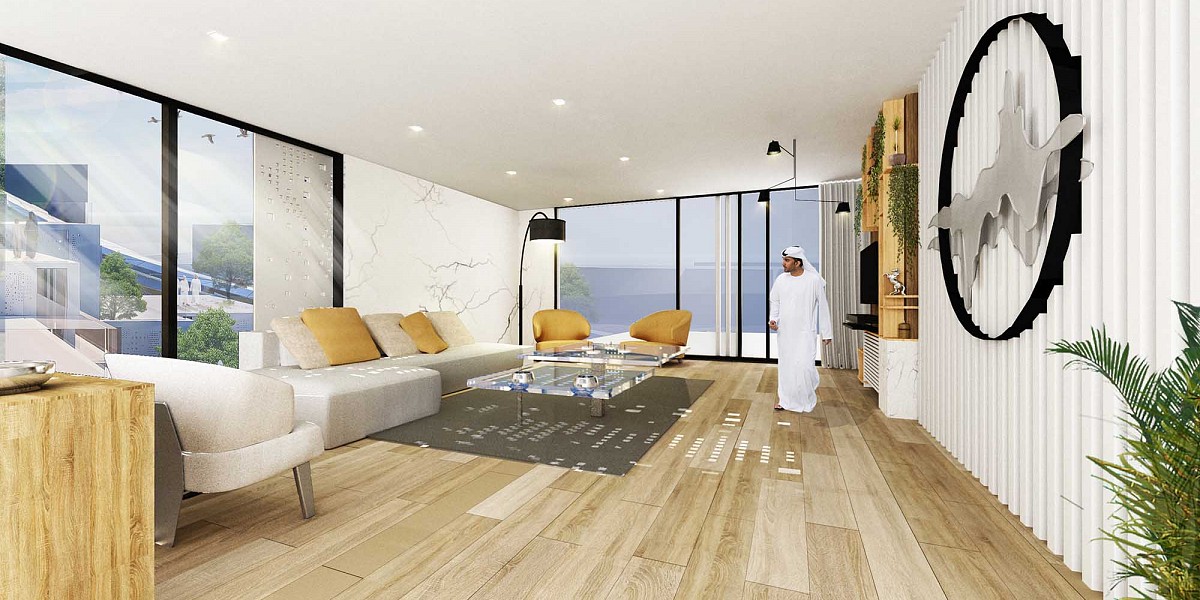 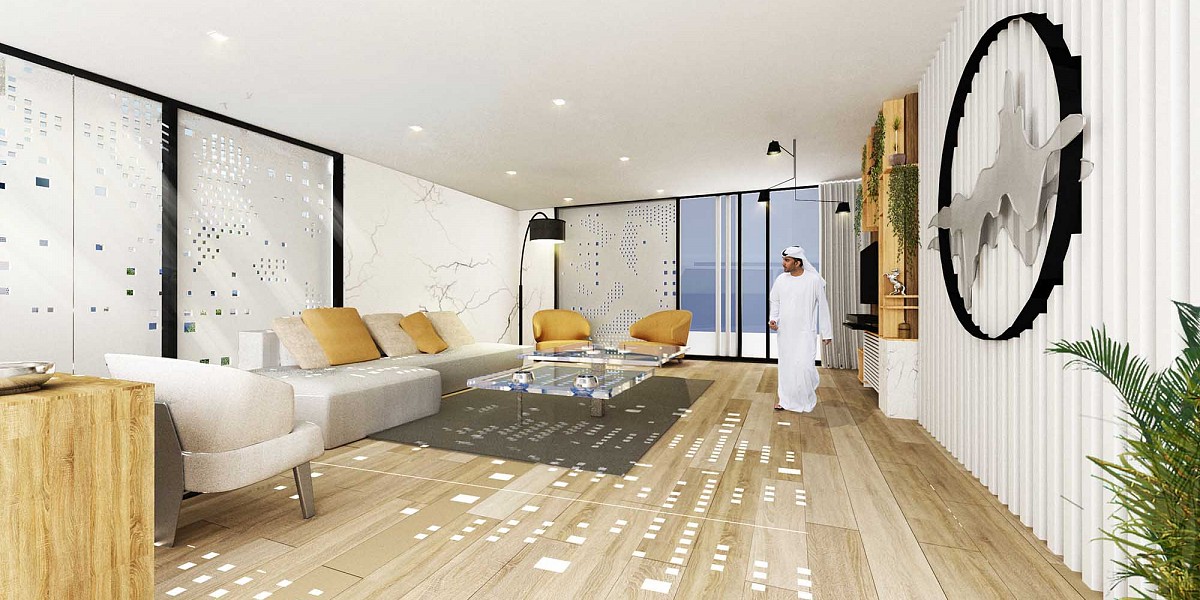 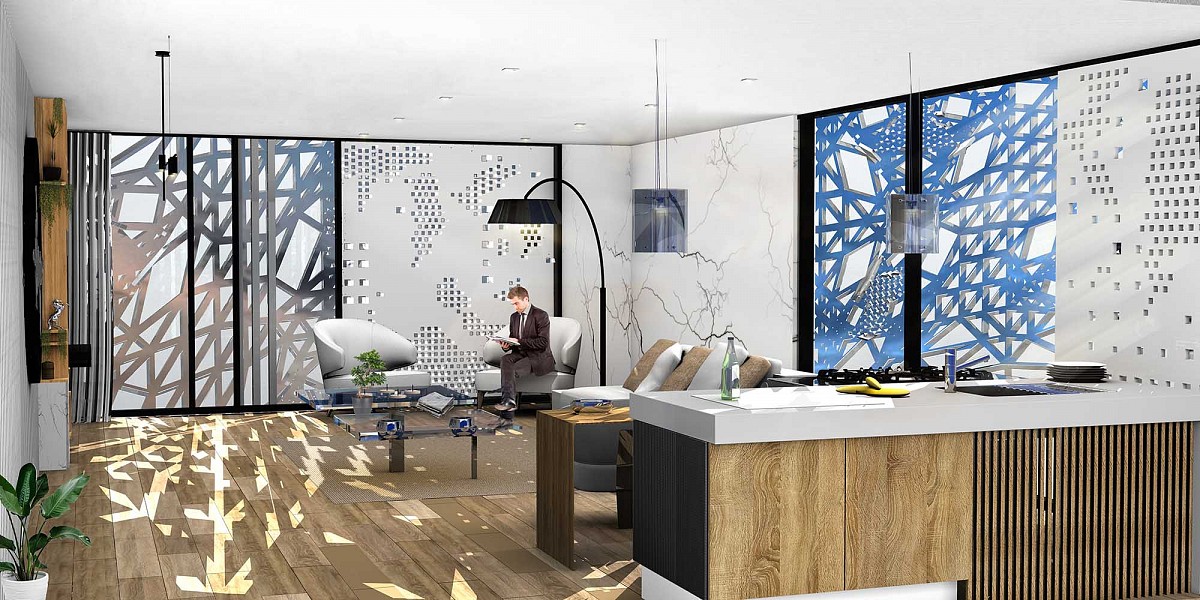 In a challenge to create a residential project that maximizes the use of outdoor spaces and connectivity in a city that avoids sun exposure, the design is flexibly an adaptive response to its context standing as a unique and genuine character in a high-end neighborhood in King Abdullah district, Riyadh-Saudi Arabia.

Emanating from a 1.2x1.2 modular grid that spreads over the land, the apartment units are demarcated as square to rectangular configurations that expand and shrink following three main typologies:

The project is based on a matrix in which the iteration of apartments acquires the same essential ingredients that embrace privacy and create a superior protected living experience (Protection from the intense hot climate of the district); hence, each unit acts as an organic cell that can change its morphology according to the tenant’s needs, synchronizing with real-time environments. Consequently, a perforated sliding shield skin depicted by a modern Arabic pattern resides in each outer corner.

The skin has two main functions:

Ultimately, the end-user has the flexibility and liberty to open and close these panels during all times of the day; For instance, any apartment can have faultless transparency during sun absence and considerable isolation during sun presence. Thus, exterior walls can function as a membrane that breathes in and out; almost like a nervous system to link between two otherwise separate environments.

The apartment units split into two blocks (Block A and Block B) are scattered on each side of the L-Shaped plot and interconnected by a central node (located in the Northern Carrefour of the site). The node comprises the main entrance hall and the common spaces (such as gym, sky garden, SPA, pools…etc.) It is seemingly considered as the main link that connects the project altogether and creates a sense of community, deviating from the prevalent Saudi typology.

The seamlessly mingled modules cascade up incrementally from the Northern sides of the land to reach their tallest corners on the south-eastern sides. (The roof’s units are 50% of the third floor’s units.  The latter is 50% of the second floor). As a result, the apartment boxes will inevitably cast shadows down across all outdoor rooftops sprinkled with trees and greenery. Nevertheless, that will not be enough. An additional shield is needed to protect the overall matrix project.

The building forms a gentle curve that rises on the southern side of the building while pressed down in the opposite direction. The chief skin shield lies underneath this infinity curve swirling around the building while maintaining its dynamic behavior as it works in real-time to meet occupant needs.

The texture of the latter is inspired by the desert’s sand pattern that gives an illusion of infinity. Also, it flawlessly filters the penetrating wind that freshens all units.